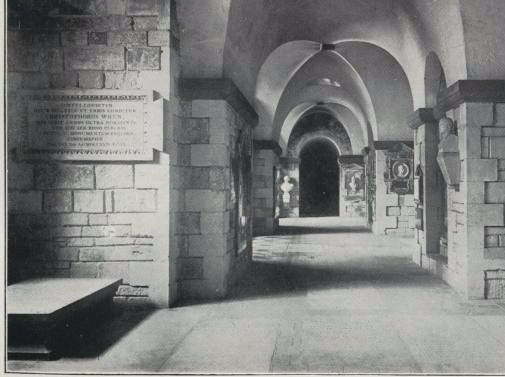 The church buildings of Medieval London have a long reach. 350 years since perishing in the Great Fire, afterimages linger. Outlines exist as small City of London gardens, or live on in the walls of the churches that Christopher Wren built after the fire – Wren’s classical forms had to fit the wayward foundations of their medieval predecessors, which is partly what makes his churches so striking.

Wren’s churches faced their share of destruction, of course. After the Blitz, some were rebuilt. Some are now gardens, too. Most still project an ancient, stone-spoken wealth, perhaps only superficially at odds with the breakneck pace of global finance as it channels through today’s City. Whatever your faith or otherwise, it can be soothing to step from the windblown, canyon-like streets of Moorgate or Bishopsgate into the deep, centuries-won calm of a City church.

We only ask that you take care before you do.

Does a plaque clearly state the building’s name? Is the church marked on a map? If not you may be entering the strange, unanchored existence of an entity that has come to be known as the church of All-Corners-Within-the-Wall.

Our best account of the constantly moving church comes from a 19th Century document written by a London Corporation clerk. It is an addendum to a survey of the City’s churches, carried out after The Union of Benifices Act had been passed by parliament in 1860. The Act paved way for the demolition of a number of City churches, to account for dwindling congregations.

Here are some extracts from the addendum:

Towards evening – I will allow that I was much fatigued – I came across an example that was, remarkably, unfamiliar to me. The solemn, solid walls were of an aspect typical of Wren and his contemporaries, but I did not gain from them the Godly gladdening of heart I have come to expect. Rather, they appeared to me most desolate and inhuman… inducing in me a sudden and tenacious melancholy…

Such was the darkness within, I had need to strain my eyes. No light reached me from the row of high, round windows. Even a great tear in the roof – through which I had clear sight of the early evening sky – aided me not. Once my eyes had adjusted I saw that the interior, like the roof, was in a state of disrepair. The pews were scattered and broken, the pulpit gone completely…

When finally I did emerge, the streets were not – it seemed to me – the streets I had entered from… so close to the furthest reaches of the City did I find myself, that I had the distinct sense that the damned building was attempting to expel me.

It seems little credence was given to this report by the Corporation at large. It languished, unread, for 150 years.

Until it was found by a new acquaintance of PoL.

Graham Herod is a City of London tour guide who has hopes of becoming London’s first widely recognised portologist. When we meet in his favourite wine bar, deep within the warren of alleys between Cornhill and Lombard Street, he has a folder of research with him which suggests he means it.

The folder contains a host of possible sightings of the lost church. They range from minor anomalies – bells heard at strange times of night, towers glimpsed down unexpected alleys – to more substantial accounts.

Herod is clear that the phenomenon is a temporal untethering. But from when and where exactly was the church untethered? What psychic trauma guides its endless haunting of the Square Mile’s time and space?

Perhaps the answer can be found in the far from restful history we have touched upon. Churches burned, bombed, rebuilt, demolished, reused. Many pieces of destroyed churches live on elsewhere. The spire of St Antholin resides in a Forest Hill council estate. Pulpits were removed from demolished churches to be used in other parishes. An entire Wren construction has been rebuilt brick by brick in Missouri, USA.

From the troubled histories, Herod has compiled a list. He won’t be drawn into naming them, but he says he “has his favourites”.

PoL can’t help speculating. Could St Swithin, London Stone be a contender? It was damaged by bombing, and until its demolition in 1962 housed the London Stone, a mysterious lump of limestone invested with all manner of significance over the centuries. Was being wrenched from such a task enough to destabilise the church’s dimensional footing?

Herod considers this, before musing, “If that were the whole story, it would be just as likely we’d be chasing an untethered WHSmiths”.

It is time for PoL to take in the London air.

Outside on the City streets, ghostlike Wren churches are everywhere. St Peter Cornhill appears to fold in and out of the surrounding buildings. The garden inside the bombed-out remains of St Dunstan-in-the-East evokes a London reclaimed by nature. The disembodied tower of St Alban Wood Street makes for a forlorn apparition amongst post-modern office buildings.

But these churches aren’t going anywhere, just yet.

Reaching the steps of St Paul’s, our mind wanders to those weeks, a few years ago, when a tent city of anti-capitalist activists filled the courtyard here. The memory chimes with one of Herod’s favourite accounts of an encounter with the church of All-Corners-Within-The-Wall.

In the late 1990s, a small group of protestors, part of a march against global capitalism, set out with a party planning to “free” the river Walbrook. They seem to have entered All-Corners somewhere along the route of the culverted river. Emerging, mildly traumatised, from the church, they found themselves within the heavily-secured inner courtyard of the headquarters of a trans-national financial corporation, and staged an impromptu occupation.

“Well, I like to think it’s another clue. The church I’m looking for is political”.

For PoL, it is yet another layer to the mystery.

The featured image shows the crypt of St Paul’s Cathedral, with the tomb of Christopher Wren | public domain

6 comments on “Wren’s Restless Sanctuary: The Church of All-Corners-Within-the-Wall”