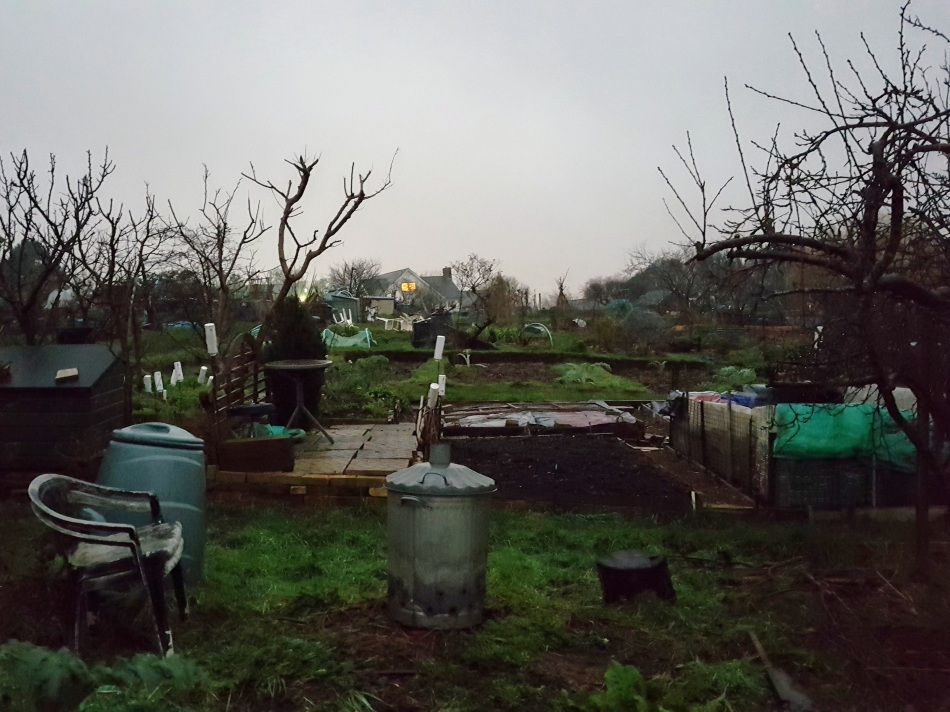 Allotment owners are well-known guardians of city space. They have good reason to be protective. Land given over to this public good has diminished in recent decades.

The keepers of South Dulwich Woods Allotments have less than most to fear from development. Theirs is a green and wealthy corner of the borough of Southwark. But padlocks and fences rule, and the politics of an overhanging apple tree can be as fraught here as anywhere.

So says Isaac Perrin, an SDWA plot-holder who kindly unlocked the gates, so that PoL could investigate tales of an unearthly nexus smouldering in the hard won soil: the South Dulwich Woods Beacon.

South Dulwich Woods is smaller and harder to find than nearby Grange Lane and Gun Site Allotments. All three are cut into woodland on the northeast-facing side of the clay outcrop Norwood Ridge, just up the hill from London’s last remaining toll gate. (“We’re the one with the constant plume of smoke”, offers Isaac.)

The woods are an hour’s walk from Brixton station, but feel much further. Brixton’s high-density Victorian terraces give way to larger houses, then playing fields and grand colleges. This land is owned by a private trust dating to Shakespeare’s London.

“Now that you’ve found us,” says Isaac, grinning as he swings open the gate, “You can help me feed the beacon”.

As a plot holder of five years, Isaac is only half joking when he calls himself a “newcomer”. He knew he was fully accepted when the SDWA committee gave him his present role: making sure a small fire in the centre of the allotment never burns out.

He takes me the scenic route, up green lanes and muddy tracks. Gardeners with dark green jumpers and friendly faces look up from their work to nod hi and watch us pass.

At first glance, South Dulwich Woods is a well-tended allotment like any other.

But here and there, among the rhubarb and runner beans, Isaac points out places where nothing grows. Small geometric shapes of dead soil; rotted lines cutting across a row of veg plots.

Isaac says these ‘lines of ungrowth’, seen from above, add up to a roughly hexagonal shape.

The beacon is at its centre.

The afore-mentioned plume of smoke leads us in to a small enclosure, ringed by fruit trees. The fire itself is unassuming, smouldering gently within a circle of stones. I am to have the honour of chucking another log on. Isaac opens the door of a wooden hut where firewood and other sundries are kept.

That job done, Isaac sets a kettle on the fire and digs around for cups and teabags. I glance around the wooden hut. A map of the northeastern night sky is pinned to a wall. A largish telescope folded up in one corner.

But Isaac knows what I’m looking for. He opens a battered logbook and takes out a yellowed newspaper cutting.

It’s dated 1972, and the subheading speaks for itself: DULWICH VEG GROWERS KEEP BONFIRE BURNING IN HOPE FOR RETURN OF VISITORS FROM SPACE

“It’s a fun story”, laughs Isaac. “The UFO landing site. People holding a flame down the centuries.” But he’s fairly sure the bonfire tradition started with one bored allotment owner 50 years ago.

In which case, I ask, what does Isaac make of the ‘ungrowth’.

“These allotments are relatively new. Post-war. Before that this was anti-aircraft gun mounts and a barrage balloon mooring site. That explains those markings if you ask me”.

Ok. But reports of strange lights predate that. A college master living in cottages at the foot of the hill, circa 1862, reported in the Summer of that year ‘orbs of light’ hovering above the fields.

“A time of great change in these parts”, shrugs Isaac. “Railway lines built to serve the new suburbs around Crystal Palace. New technologies. Tunnels cut through the hill beneath us”.

And what about the words of King James I, in a 1619 letter to his Lord Chancellor? Discussing the legal deeds permitting actor Edward Alleyn to found a college on his Dulwich estate, James joked, ‘perhaps the poor scholars might solve those sky-borne lights reported lately on the actor’s prominence?’.

There have always been strange lights, says Isaac. And there has always been folklore, he adds. He doesn’t want me to think him incurious.

He knows this old patch of the Great North Wood well. He speaks of caverns in the woods where a hermit once lived; of the muddy ditch, the Ambrook, which flows across the golf course, before joining the grave-robbing Effra on its underground journey to the Thames.

“During the first lockdown,” he says, “young couples trespassed the golf course to sunbathe on the putting greens. Now the fences and KEEP OUT signs round here are higher than before. What I’m getting at is – people use the land and its stories how they can, when they can”.

For him, the value of the beacon story is the extra sense of community it brings. The shared endeavour. The nights sat out drinking summer wine in August, waiting for the two or three Perseid meteors that are visible through the London glare.

I can’t help feeling Isaac has guided the conversation, gardener-like, along a path of his own choosing. But the sky, I notice, is darkening. I should start my walk back to the station, after a moment more admiring the allotment’s jealously guarded view.

Below us, before us, London’s streetlights blink on. The Shard’s point glows skyward. Descending planes flash westward to Heathrow.

As Isaac walks me down through the dusk to the gate, the lights at the edge of the allotment are only houses.

Then a light in the sky does come. Out of the west, it burns a steady path across the sky. Too bright and unwavering to be an aeroplane, I check later on my NightSky app. It was the International Space Station, winding its quiet circle around the Earth.

And the way Isaac had jerked his head up to see it, you would swear he was expecting something.