Stroll east along the Strand, on the side of the street closest to the river, and go past Somerset House. When you see a gap between two buildings, turn river-ward. After ducking beneath an old watch house you will find yourself in a steep, narrow alley. Suddenly you are a world away from the busses and taxis, from the harried tourists and coffee-seeking office workers. A little way down, in a wall behind a railing, there is a scratchy, misted window. Next to the window is a switch. If you are lucky, the switch will be working, and a dim light will fall on the cellar to which the window leads. Even so, you will need to press your face to the glass. Within – cut into the floor of a pale, peeling-plaster room – is a large basin. It is roughly rectangular in shape, and measures perhaps four metres by two, with a depth of a metre and a half.

You are looking at London’s first inter-dimensional gateway.

The title on the information plaque beside the window will say that you are looking at the Strand Lane Bath. The rest of the text, like the cellar light, is oddly noncommittal and far from illuminating. There are hints at a controversy surrounding the origins of this plain-seeming piece of masonry. The plaque gives almost grudging mention to what is, in fact, a substantial school of thought that the structure was a cistern, built to serve one of the 17th Century Houses which once lined the embankment alongside Somerset House. But the authors seem loath to give up the backstory that many other Londoners would tell you – that the bath is a piece of Roman London, once part of a larger network of bathing rooms, and thus at the epicentre of society in 2nd Century Londinium.

Confused origins, oral histories that contradict the paper trail, academia in conflict with folk knowledge – this is fertile ground for PoL. The story of London’s portals often gets lost in the noise.

And indeed, a further controversy surrounds the Strand Lane Bath, one not mentioned on the plaque. There is a group of scholars who agree on the ‘Roman’ part, but have something to add when it comes to the ‘Bath’ bit – we speak, of course, of those scholars concerned with the history of London’s portals. The Strand Lane Bath proves just as divisive among this community. 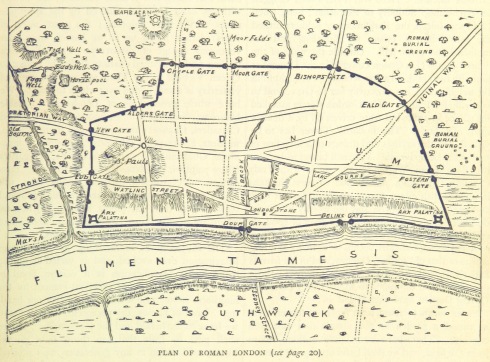 That Roman London contained at least one ‘manmade’ inter-dimensional gateway – and that it took the form of a bath – is not contested among portologists. The portal, known then and now as The Quaerium, is referred to in the writings of well-connected traveller Fabius Viatorio, who accompanied Emperor Hadrian on his visit to Londinium in 122 AD. Many – though not all – portologists argue that in the extract that follows, the description of the portal’s location and dimensions fit with the Strand bath:

‘In Londinium, on a hill close to that settlement’s Great River, a Merchant, with help from wise men, has built a small but wonderful temple. No Gods are worshipped within its walls. Inside the temple is a bath of modest proportions, but to submerge oneself in the milky liquid is to do more than bathe. This merchant holds famous gatherings, at which women and men sink into the water, and onwards into other Worlds’

Romans had been trying for some time to open doors to other dimensions. Perhaps it surprised them that when it happened it was in the Empire’s rainy North-Western outpost. We’ll probably never know whether The Quaerium’s builders had help from members of the subjugated population – Viatorio’s ‘wise men’ are intriguingly vague – but either way, portologists agree that whoever built the Londinium door seem to be the first documented beneficiaries of London’s uniquely leaky dimensional thresholds.

One thing portologists don’t agree on is the exact nature of the Quaerium. Debate rumbles over whether it was a door to other dimensions, a portal to other stars and planets in ‘our’ universe, or simply a place-pinned (Wellsian) time machine. Adherents of the latter cite an entry from the diary of an unnamed Roman General, in which the author recounts a dip into The Quaerium’s liquid: “I walked in a land untouched by man, hot beneath a white sun, strange birds in the sky above me, strange grasses beneath my feet. To my south were forested hills, and before them, a river flowing eastwards through a great, salty swamp”.

Again, many say the description could easily describe the Strand location in pre-historic times.

But not all scholars are convinced that the Strand Lane Bath and the Quaerium are one and the same.

PoL wanted to speak to one of the doubters, so we met up with a good friend of ours – Susan Macks, Crypto-archealogist at the University of Connecticut.

“First off, don’t listen to the Time-Machinees”, began Macks, between gulps of coffee and bites of pastel de nata. “The Quaerium was a full on TIDD [truly inter-dimensional doorway], you better believe it. But… I don’t know. I’ve been studying this doozy my entire career. It’s one of the main things that brought me to London. The Quaerium was Number One, the first documented portal in this amazing city of portals. Maybe the first, period. Like, what if The Quaerium was the door that started the whole thing? The first loose thread in the fabric, you know? These Roman dudes tugged on it almost for fun, and London’s dimensional pullover has been unravelling ever since. I love it. I love the Quaerium. I would dearly love it if we’ve found it. But I just don’t see the hard proof here, sorry”.

So, maybe just a cistern after all?

Macks believes that, like most of London’s Roman architecture, the Quaerium was likely destroyed long ago (“For all we know the descendants of Boudica smashed the thing to pieces under their stolen, golden hipposandals”). But like we say, PoL is always drawn to a confused history. And from new HQ’s for bankers to new stations for Crossrail, the ground beneath central London has rarely been such an open wound – with significant Roman artefacts still being discovered, we aren’t quite ready to give up the search.