Hornsey Town Hall is suspended in time, caught between a vanished past and an uncertain future.

Recently, we walked through the revolving doors of this crumbling Crouch End landmark, right into one of the last guided tours before the building closes for redevelopment.

We tagged along. The guide was passionate, informative and – unsurprisingly – mentioned nothing of the rumours of temporal disturbances which had brought PoL there in the first place.

What we got was a concise history of the art deco modernist building and its large assembly hall: From a 1930s heyday as the centre for local government in the leafy, Middlesex Borough of Hornsey; through its sudden redundancy in 1965, when Hornsey became part of the Greater London Borough of Haringey; to the limbo years, in which architectural neglect has contrasted community-led reuse of the space as a venue for roller-discos and art shows.

But after the tour, in the square out front, we found a quiet moment with the guide. What could they tell us about the Town Hall as a place where the borders between worlds are especially porous?

The look we received would be familiar to anyone who has confronted the public amnesia that clouds the history of London’s fractious dimensional state. But as we turned to leave, the guide called us back. There was, as it happens, someone we could talk to – if we were interested in that sort of thing.

A week later, we are back in Crouch End – sat in a teashop with Janet Hispall: local resident, born-and-raised. Janet has recently retired from a career in museums, but back in the mid-60s, her first job was in the Town Hall, as a clerk to the Mayor’s office.

She says she heard the stories from day one.

Unexplained shadows in glass panes. Noises behind the oak paneling. The strange properties of the spiralling back stairs. Janet recalls hearing from one of the cleaning staff that on the upper floors, late in the evening, when the building was mostly empty, the woman would often see a grey deer passing through the twilit corridors.

“I thought they were all bonkers”, says Janet.

But then the time discrepancies began. 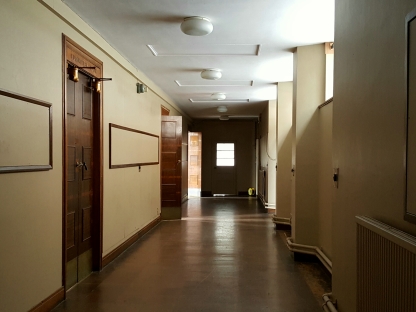 It was quite an inconvenience, says Janet. You’d pop down the corridor to pick up a friend at lunchtime, only to discover you’d arrived midway through the afternoon. You’d lose an hour just going up the stairs. Scheduling meetings in the council chamber became a nightmare.

“The worst I had it was with the Day of the Double Documents” says Janet, with a knowing hamminess.

Back at her desk – and back at the ‘timezone’ she had started in – she binned the unsigned documents and carried on with her day.

Besides, the council workers had an ally. The Day of the Double Documents, says Janet, might not have happened if she hadn’t forgotten the golden rule: 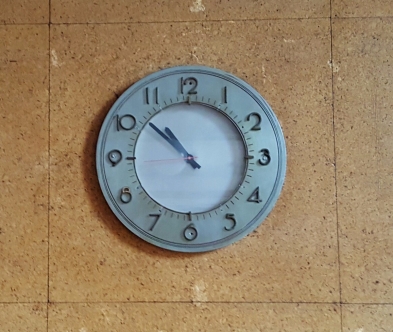 The Hornsey Town Hall clocks are an art deco feature still admired today. In the 1930s, they had an unusual technological element: they were synchronised, linked to a central timepiece in the basement. Long since defunct, the mechanism was still operating in Janet’s time.

“We learned to live by those clocks”.

Employees, explains Janet, viewed the time discrepancies in terms of separate rooms and corridors becoming temporally mis-matched – as if doorways were acting as the boundaries between the differing timezones.

Every room or corridor had a clock. By checking the clock before leaving one room, and checking the next one you saw, you knew instantly whether a time jump had occurred. It was found that if you retraced your steps – returned to the previous room – the time discrepancy, more often than not, would resolve itself.

“It all seemed to come out in the wash”, says Janet. “You’d walk out at the end of the day just the same, into the safe old Crouch End streets. Didn’t bother me much. Until someone raised the question of the ‘other us’s'”

The ‘other us’s’ was one name for them. Others called them the ‘lost doppelgangers’.

“That’s where it gets creepy”, admits Janet.

Let’s take the Day of the Double Documents. Janet’s experience of that day was linear – albeit along a line that jumped back-and-forth through time. She only took the documents to the Mayor’s office once. But from the point of view of the Mayor, ‘Janet’ brought them twice.

No doppelganger left the building at the end of the day. So what about the linear experience of this ‘other’ Janet?

Were thresholds within the building acting not just as the boundaries of different timezones, but as forks in alternative realities? In this scenario, ‘other Janet’ splits from Janet the moment she leaves her office with the papers. ‘Other Janet’ then jumps to earlier in the day, delivers the documents, leaves the Mayor’s office and returns to… where? 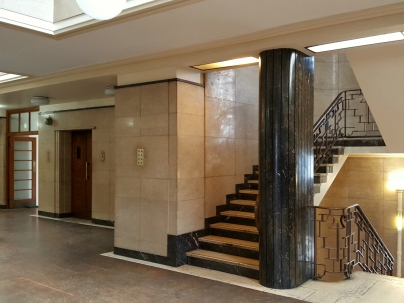 Janet doesn’t have the answers. But she hasn’t stopped searching. She is still well known within the Town Hall community.

“I’m tolerated”, she says with a smile. “They think I’m rather dotty, to be honest with you.”

She is nervous of how the forthcoming redevelopment will effect her ability to ‘investigate’.

“I’m not sure it’s all over”, she says, draining the last dregs from the teapot. “I mean, I suppose the time jumps are. But I always saw them as symptoms of an underlying malady”.

So Janet now accepts the old stories about the place?

She nods. “If you visited that place, as I have, in the dead of night. Stood in the pitch black in the centre of the great, sinking assembly hall, listened to the murmurs from deep within the lake it’s built on. If you’d seen the strange lights in the windows of the abandoned box office, you’d believe the old stories too.”