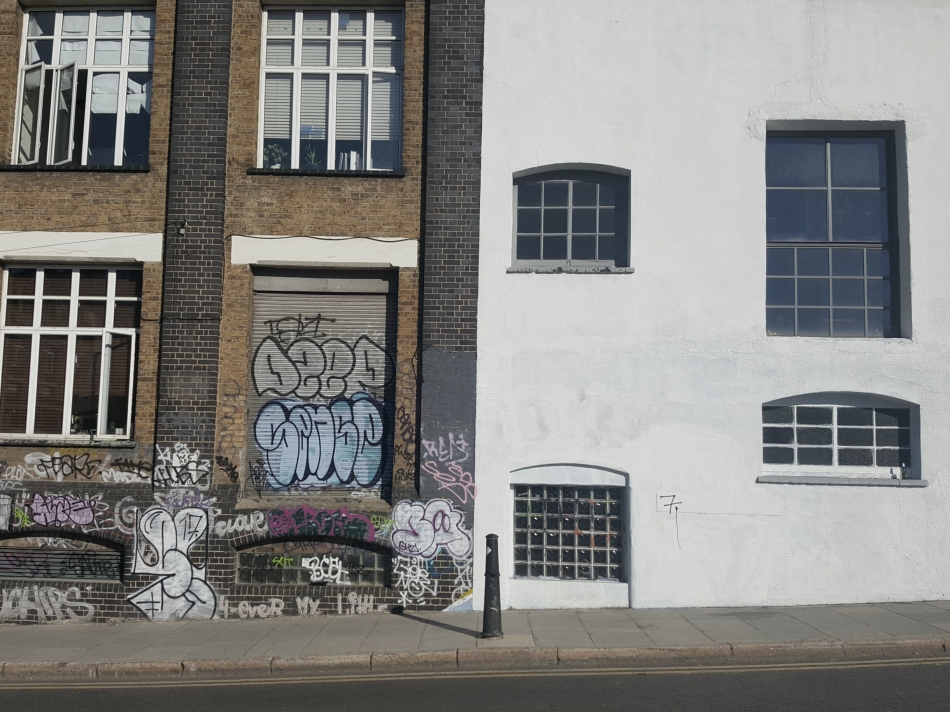 Six years have passed since the events described below. By nature, the story is difficult to confirm, but key elements make it a candidate for the catalogue.

Glenn White talks a mile a minute. We give over the remainder of this post to his (minimally edited) account:

This was Summer, 2012. The Olympics. The purple-shirt guys everywhere. I was out around Hackney a lot because of my job. Bright and early, sunny mornings. Everyone had been told to keep away from that end of London for fear of crowds. Only the crowds never came, or at least they stuck to the Olympic Park. Cambridge Heath Road was weirdly quiet. Eerie. The odd bemused tourist trundling a massive suitcase through the previous night’s chip wrappers.

I delivered bread for this sourdough bakery in a warehouse unit down Hackney Wick. We had our own cafe at the front, but we also supplied other places. We went all over, into Dalston, Spitalfields, Canonbury even. I’d get there 4am and after firing up the coffee machine and scouring for bits of yesterday’s cake I’d bag up the first batch of loaves and load my first run into this tiny electric van out front, which had the bakehouse logo on the side. We called it The Bread Float, which pissed the boss off, though he wouldn’t admit it.

4am sounds early but you’ve got to pity whoever was doing the night baking – they’d already been there a couple of hours by then. There was 2 or 3 of them on a rota, only ever one at a time. Most often it was this girl Carla. Now, before I’d even rattled the shutters, I’d know it was Carla inside from the music she was playing. With her it was always ambient and noise, endless obscure playlists from the weirder end of NTS or Resonance. Not what I’d have stuck on if I was on my tod in that place at 3am. Spooky enough as it was.

Thing is, Carla did tend to look like a ghost whenever she unlocked the shutter door to let me in. Like, she’d be wearing white overalls and covered in flour of course but that’s not what I mean. I mean she’d look haunted.

After a while she told me why.

To begin with it was all about the sound system. We had this iPad mounted to the wall between the counter and the baker’s worktops, connected to a few speakers around the place. Decent enough set-up. Only, she said she heard weird sounds on it. I said, no shit, play something else then. But no, she said it didn’t matter what the music was, sometimes it would just cut out and these sounds would begin – clanging sounds, metallic sounds. They started distant, but were getting louder every time. Not always the same pitch or tempo, but the same sort of rhythm.

I said, turn the iPad off, if you don’t like it. She looked well scared then. Told me she’d tried that: The sound didn’t stop. She’d unplugged the speakers and everything. The sound kept coming out of them.

Anyway I’m explaining it to you now, because after a couple of weeks of me telling her it was mobile interference, or flour in the iPad, or the speakers somehow picking up a passing train – well, one morning, I finally heard it myself.

But there’s this other element I haven’t told you about. The office. I say office, it was like a little wooden mezzanine halfway up the interior wall, with MDF up around it and enough space for a small desk with a PC on it. And at that time of morning, before the shutters were open, it was dark up there (the rest of the place was lit by harsh fluorescent strip-lighting), except this faint glow from the PC monitor which the boss never bothered to shut down.

Well, Carla fucking hated that office. She was more scared of that than she was of the noises. She wouldn’t even go near the steps. I had to go up there every morning to print off the delivery sheet and she’d get dead nervous when I did. Only, unlike with the sounds, she wouldn’t ever talk about it. Which freaked me out more, for some reason.

Anyway, this one morning – the morning in question – I’m coming back in from a delivery run and I know something’s wrong straight away, ’cause I can smell burning. There’s smoke coming out of the ovens, black loaves through the glass. First thing I try and do is switch the ovens off, but I don’t know how. I pull the doors open but I’m not sure if that’s helping apart from making it a lot more smokey. What I really need is Carla. And I think – she’s gone. Where the hell is she?

But then I see her.

She’s up there. The office. Just standing in the light of the PC and – I swear it now – there’s someone else, in the shadows beyond her. Or, no – not someone. There’s something up there with Carla.

And then I notice it. The sound. The voice. And the PC monitor’s flickering, and I call her name and Carla swings round to look at me, and her hand shoots out as if to push the monitor away. And then there’s just darkness up there. And silence. And she walks down the stairs with this blank look. I can’t remember if I asked her who or what she’d been talking to. I can’t remember if we said anything.

But there is one other thing I remember, and given what was going on it’s weird I noticed it. There was this one square window high up on the brick wall at the far end of the unit. It let in the only natural daylight when the front shutters were down – which they were at that moment. And the sun was up, I’d been driving around in it, so daylight should have been streaming through that window. But it wasn’t. It was black as night.

I’m not sure if I saw Carla again after that. If she had time off, or ever came back at all, I don’t remember. Tell you the truth I left soon after, found another job. I mean, you would, wouldn’t you? I lost touch with the crew there. People move on. The bakery’s got a few other branches now, but the Hackney Wick one’s gone. The whole unit has.